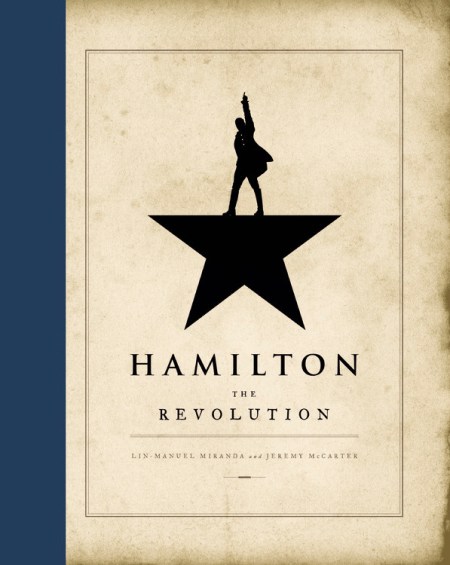 by Lin-Manuel Miranda by Jeremy McCarter
A backstage pass to the groundbreaking, hit musical Hamilton, winner of the 2016 Pulitzer Prize for Drama and Eleven Tony Awards, including Best Musical, including the award-winning libretto, behind-the-scenes photos and interviews, and exclusive footnotes from composer-lyricist-star Lin-Manuel Miranda, now streaming on Disney+ with the original cast.
Lin-Manuel Miranda’s groundbreaking musical Hamilton is as revolutionary as its subject, the poor kid from the Caribbean who fought the British, defended the Constitution, and helped to found the United States. Fusing hip-hop, pop, R&B, and the best traditions of theater, this once-in-a-generation show broadens the sound of Broadway, reveals the storytelling power of rap, and claims our country’s origins for a diverse new generation.

Hamilton: The Revolution gives readers an unprecedented view of both revolutions, from the only two writers able to provide it. Miranda, along with Jeremy McCarter, a cultural critic and theater artist who was involved in the project from its earliest stages — “since before this was even a show,” according to Miranda — traces its development from an improbable performance at the White House to its landmark opening night on Broadway six years later. In addition, Miranda has written more than 200 funny, revealing footnotes for his award-winning libretto, the full text of which is published here.

Their account features photos by the renowned Frank Ockenfels and veteran Broadway photographer, Joan Marcus; exclusive looks at notebooks and emails; interviews with Questlove, Stephen Sondheim, leading political commentators, and more than 50 people involved with the production; and multiple appearances by President Obama himself. The book does more than tell the surprising story of how a Broadway musical became a national phenomenon: It demonstrates that America has always been renewed by the brash upstarts and brilliant outsiders, the men and women who don’t throw away their shot. 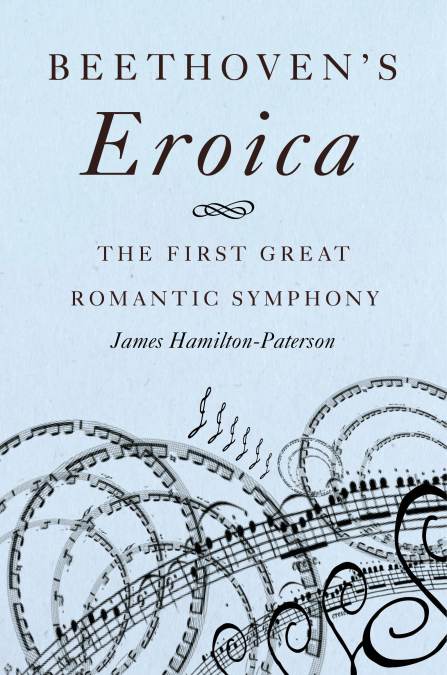 by James Hamilton-Paterson
An ode to Beethoven’s revolutionary masterpiece, his Third Symphony

In 1805, the world of music was startled by an avant-garde and explosive new work. Intellectually and emotionally, Beethoven’s Third Symphony, the “Eroica,” rudely broke the mold of the Viennese Classical symphony and revealed a powerful new expressiveness, both personal and societal. Even the whiff of actual political revolution was woven into the work-it was originally inscribed to Napoleon Bonaparte, a dangerous hero for a composer dependent on conservative royal patronage. With the first two stunning chords of the “Eroica,” classical music was transformed.

In Beethoven’s Eroica, James Hamilton-Paterson reconstructs this great moment in Western culture, the shock of the music and the symphony’s long afterlife. 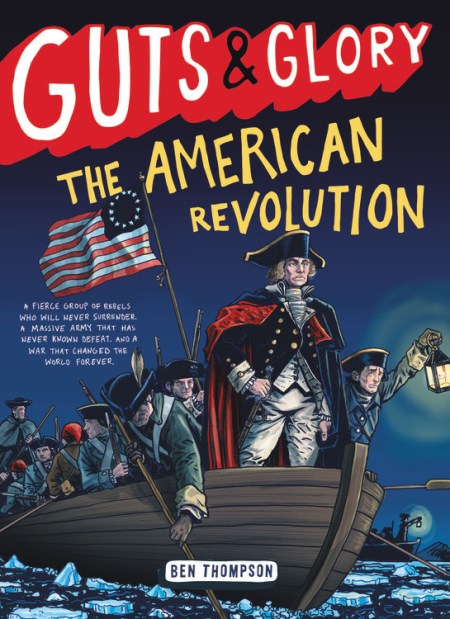 by Ben Thompson
Now available in paperback, this fourth book in the action-packed Guts & Glory series takes readers through the exciting and fascinating history of the American Revolution. Perfect for history buffs, reluctant readers, and fans of Hamilton!

From George Washington crossing the icy Delaware, to Molly Pitcher fearlessly firing her cannon, the people of the American Revolution were some of the bravest and most inspiring of all time. Jump into a riot in the streets of Boston, join the Culper Spy Ring as they steal secrets in the dead of night, and watch the signing of the Declaration of Independence in this accessible, illustrated guide to the birth of the United States. 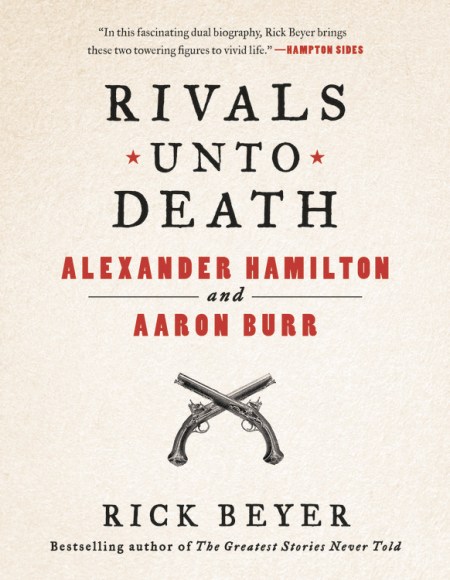 by Rick Beyer
From the bestselling author of The Greatest Stories Never Told series, the epic history of Alexander Hamilton and Aaron Burr’s illustrious and eccentric political careers and their fateful rivalry.

The famous duel between Alexander Hamilton and Aaron Burr was the culmination of a story three decades in the making. Rivals unto Death vividly traces their rivalry back to the earliest days of the American Revolution, when Hamilton and Burr — both brilliant, restless, and barely twenty years old — elbowed their way onto the staff of General George Washington. The fast-moving account traces their intricate tug-of war, uncovering surprising details that led to their deadly encounter through battlefields, courtrooms, bedrooms, and the wildest presidential election in history, counting down the years to their fateful rendezvous on the dueling ground.

This is politics made personal: shrill accusations, bruising collisions, and a parade of flesh and blood founders struggling–and often failing–to keep their tempers and jealousies in check. Smoldering in the background was a fundamental political divide that threatened to tear the new nation in two, and still persists to this day.

The Burr and Hamilton that leap out of these pages are passionate, engaging, and utterly human characters inextricably linked together as Rivals unto Death. 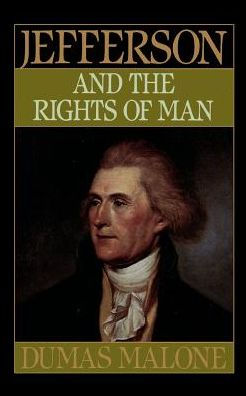 Jefferson and the Rights of Man - Volume II

by Dumas Malone
The second volume in this Pulitzer Prize-winning biography tells the story of the eventful middle years in the life of Thomas Jefferson: his ministry to France in the years just before the French Revolution and during the early stages of that conflict; his service as secretary of state in President George Washington’s first cabinet; the crucial period of his first differences with Alexander Hamilton and the beginnings of his long struggle with the Federalists. . 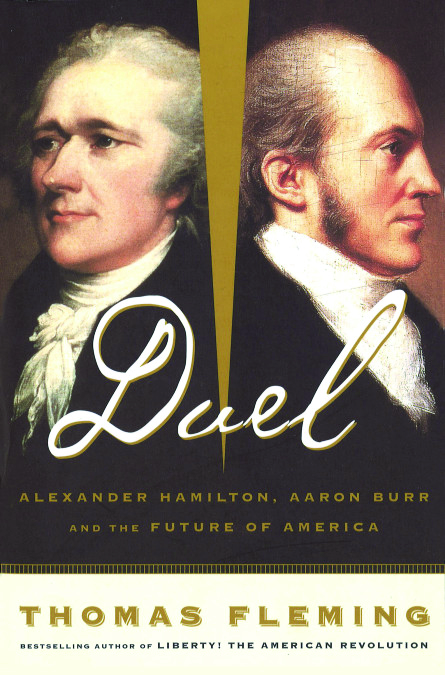 by Thomas Fleming
All school children know the story of the fatal duel between Hamilton and Burr – but do they really? In this remarkable retelling, Thomas Fleming takes the reader into the post-revolutionary world of 1804, a chaotic and fragile time in the young country as well as a time of tremendous global instability. The success of the French Revolution and the proclamation of Napoleon as First Consul for Life had enormous impact on men like Hamilton and Burr, feeding their own political fantasies at a time of perceived Federal government weakness and corrosion. Their hunger for fame spawned antagonisms that wreaked havoc on themselves and their families and threatened to destabilize the fragile young American republic. From that poisonous brew came the tangle of regret and anger and ambition that drove the two to their murderous confrontation in Weehawken, New Jersey. Readers will find this is popular narrative history at its most authoritative, and authoritative history at its most readable. 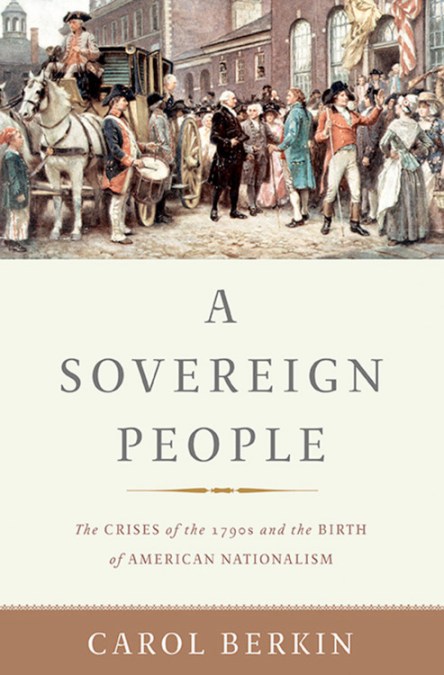 by Carol Berkin
The momentous story of how George Washington, Alexander Hamilton, and John Adams navigated the crises of the 1790s and in the process bound the states into a unified nation

Today the United States is the dominant power in world affairs, and that status seems assured. Yet in the decade following the ratification of the Constitution, the republic’s existence was contingent and fragile, challenged by domestic rebellions, foreign interference, and the always-present danger of collapse into mob rule.

Carol Berkin reveals that the nation survived almost entirely due to the actions of the Federalist leadership — George Washington, Alexander Hamilton, and John Adams. Reacting to successive crises, they extended the power of the federal government and fended off foreign attempts to subvert American sovereignty. As Berkin argues, the result was a spike in nationalism, as ordinary citizens began to identify with their nation first, their home states second.

While the Revolution freed the states and the Constitution linked them as never before, this landmark work shows that it was the Federalists who transformed the states into an enduring nation. 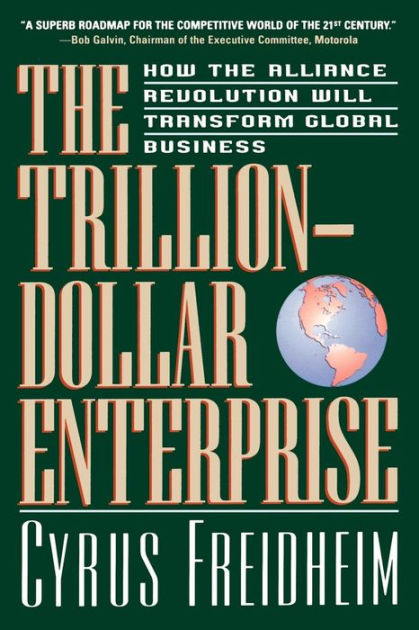 by Cyrus Freidheim
Beyond the multinational corporation — even beyond the mega-corporation built from aggressive mergers and acquisitions — a new form of global business is emerging, and it is changing the competitive landscape forever. In his visionary book, The Trillion-Dollar Enterprise, Cyrus Freidheim offers a front-row seat to this seismic shift, through which a few dominant enterprises will control two-thirds of the global market in their respective industries. But they won’t be corporations as we’ve known them. They will be vast networks of corporate alliances — global coalitions of independent firms acting in concert as single entities, and combining assets that exceed the entire output of many nations. Drawing from fifteen years of groundbreaking research at Booz-Allen & Hamilton, Freidheim convincingly demonstrates that the rise of networks of this magnitude is natural and inevitable, as companies forego traditional — and riskier — methods of expansion in favor of alliances, joint ventures, and other collaborative arrangements that capture the best capabilities of the participants while avoiding the bureaucratic disadvantages of size. Already, we are witnessing the convergence in industries as diverse as telecommunications, aerospace, and commercial aviation into alliance networks, clustered around a few dominant players. For example, the global airline industry is coalescing around networks, led by United and Lufthansa in the Star Alliance and by American Airlines and British Airways in another. From the global stage, Freidheim takes up deep into the heart of “Trillion-Dollar Enterprises” in development, identifying the key elements of successful network formation, and outlining new roles and responsibilities for managers, executives, teams and boards. Freidheim ultimately calls for revolutionary changes in how business leaders should be educated and rewarded, as the skills of diplomacy and negotiation take priority over functional expertise. In his provocative conclusion, Freidheim takes us twenty-five years into the future to explore looming public issues as the forces of commercial globalization and political sovereignty collide, challenging existing paradigms of anti-trust, trade, and labor policies — and even national security. 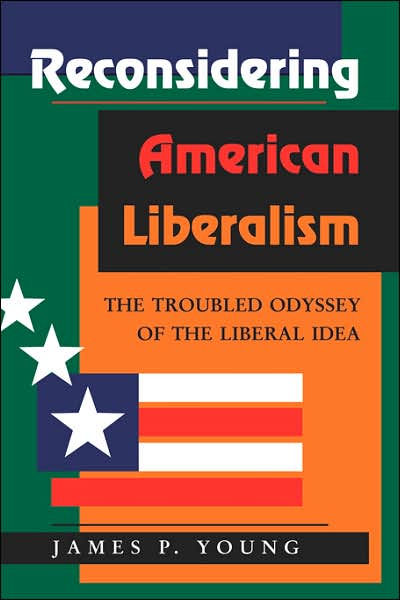 by James Young
Forty years ago Louis Hartz surveyed American political thought in his classic The Liberal Tradition in America. He concluded that American politics was based on a broad liberal consensus made possible by a unique American historical experience, a thesis that seemed to minimize the role of political conflict.Today, with conflict on the rise and with much of liberalism in disarray, James P. Young revisits these questions to reevaluate Hartz's interpretation of American politics. Young's treatment of key movements in our history, especially Puritanism and republicanism's early contribution to the Revolution and the Constitution, demonstrates in the spirit of Dewey and others that the liberal tradition is richer and more complex than Hartz and most contemporary theorists have allowed.The breadth of Young's account is unrivaled. Reconsidering American Liberalism gives voice not just to Locke, Jefferson, Hamilton, Madison, Lincoln, and Dewey but also to Rawls, Shklar, Kateb, Wolin, and Walzer. In addition to broad discussions of all the major figures in over 300 years of political thought—with Lincoln looming particularly large—Young touches upon modern feminism and conservatism, multiculturalism, postmodernism, rights-based liberalism, and social democracy. Out of these contemporary materials Young synthesizes a new position, a smarter and tougher liberalism not just forged from historical materials but reshaped in the rough and tumble of contemporary thought and politics.This exceptionally timely study is both a powerful survey of the whole of U.S. political thought and a trenchant critique of contemporary political debates. At a time of acrimony and confusion in our national politics, Young enables us to see that salvaging a viable future depends upon our understanding how we have reached this point.Never without his own opinions, Young is scrupulously fair to the widest range of thinkers and marvelously clear in getting to the heart of their ideas. Although his book is a substantial contribution to political theory and the history of ideas, it is always accessible and lively enough for the informed general reader. It is essential reading for anyone who cares about the future of U.S. political thought or, indeed, about the future of the country itself.